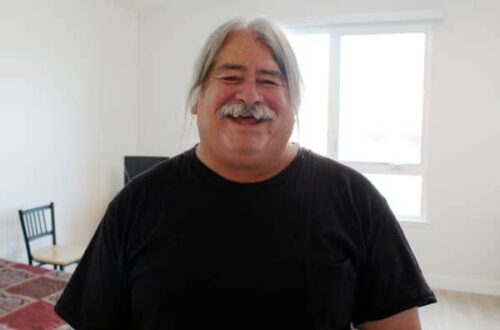 “No one ever expects to get where you can’t work, and end up on the street,” Ricky Lopez, 57, confessed. “You see homeless people and hope to God you are never there. I couldn’t even picture myself being in that position, and there I was.”

Homeless no more, Ricky was the first resident to move into a studio apartment at the Talmadge Gateway, a new community of 59 affordable studio apartment homes designed for seniors age 55 or older who have experienced homelessness and are medically frail. Talmadge Gateway opened in late June 2017 through a partnership with Wakeland Housing and Development Corporation (Wakeland Housing), City Heights Community Development Corporation, and St. Paul’s Program of All-Inclusive Care for the Elderly (PACE).

“I have been to the worst place in the world, where I don’t ever want to go again, and to the best place in the world,” Ricky declared, spreading his arms open in reference to his new apartment. “When I first moved in, I cried for several days; now I can’t stop smiling. I wake up every day thinking, this is mine! I can make plans.”

Ricky describes himself as a happy person with a strong work ethic and drive. When his health was better, he earned a decent living in construction in the trade show industry. For a while, Ricky was working all the time. He had an apartment. Things were moving steadily along. Then his health declined.

“I just ruined my legs,” Ricky shakes his head, looking down.”I was dragging my feet the last few years. I couldn’t work trade shows anymore because my health was poor. I ran out of money.”

No longer able to afford to pay rent, Ricky moved out to the streets. Each day, he went to St. Vincent de Paul’s Village, a homeless shelter in San Diego, and tried to get in. It took four months. In the meantime, he says he stayed sober. For nearly 15 months, Ricky lived on the streets of San Diego. He never stayed in one place too long.

“I didn’t live in a community camp,” Ricky explained. “I lived on my own. I would hear about a stabbing or a shooting somewhere. There were times I felt afraid. Every day I lay my head down, I thought – how many more days do I have to lie down on a piece of dirt, pick the rocks out of my body? I started to work my way out by talking to people.”

It was at the San Diego Center for Homeless Adults that Ricky learned about St. Vincent’s and through St. Vincent’s that he learned about St. Paul’s PACE. He was intrigued by the convenience of getting all of his medical needs cared for in one location. He had a lot of health problems at the time, from high blood pressure to chronic leg pain to sleep apnea. Ricky says he suffered from sleep apnea so severely that when he’d sit for 15 seconds, he would fall asleep, he was so exhausted.

“Because of St. Paul’s PACE I was able to get a sleep test done,” Ricky delighted. “I went in, and they told me I had about 87 instances where my sleep was disrupted. I said, ‘I told you! I knew if you tested me you would understand – 87 in one night!’ The St. Paul’s PACE doctor said, ‘No, 87 in one hour!’”

Through St. Paul’s PACE, Ricky was able to get help for his sleep apnea and other ailments, and through St. Paul’s and their partnership with Wakeland Housing, he has found a permanent place to live. He is ecstatic about his new studio apartment home. 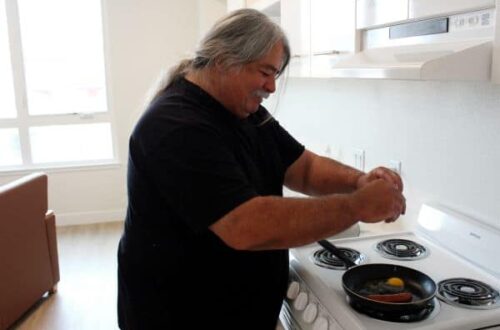 “People ask me what it looks like in my apartment,” Ricky smiled. “It is perfect. It’s just beautiful.”

“I sit here and think – wow – then I start opening drawers and I think, oh my God, they gave me a can opener, I have dishes … and a stove,” he exclaimed. “Oh my God, I can cook; I can make myself a meal!”

Unable to work because of his disabilities, Ricky is adamant about giving back in a way that he can. He wants to help others like he was helped.

“My number one goal is to try to help people that need help, need that push, are tired of falling back down because no one cares about them – there are so many,” Ricky furrows his brows and leans forward intently. “I need to show people how to get here. I know I can’t work anymore. My feet hurt just standing around doing nothing. But I can volunteer. I can help other people the way people helped me. I can show people where to go for help, that there is hope, good things can happen.”

This website uses cookies to improve your experience while you navigate through the website. Out of these, the cookies that are categorized as necessary are stored on your browser as they are essential for the working of basic functionalities of the website. We also use third-party cookies that help us analyze and understand how you use this website. These cookies will be stored in your browser only with your consent. You also have the option to opt-out of these cookies. But opting out of some of these cookies may affect your browsing experience.
Necessary Always Enabled
Necessary cookies are absolutely essential for the website to function properly. This category only includes cookies that ensures basic functionalities and security features of the website. These cookies do not store any personal information.
Non-necessary
Any cookies that may not be particularly necessary for the website to function and is used specifically to collect user personal data via analytics, ads, other embedded contents are termed as non-necessary cookies. It is mandatory to procure user consent prior to running these cookies on your website.
SAVE & ACCEPT