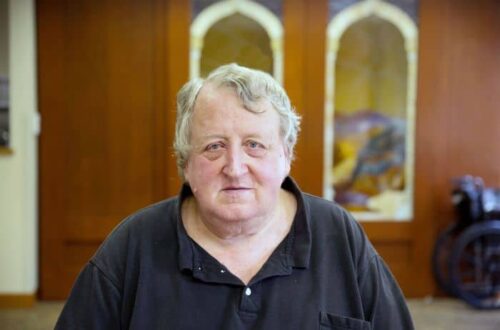 “I was real sad – all the time,” Roger Totton admits. “I felt like ending it.”

Before he enrolled in St. Paul’s Program of All-Inclusive Care for the Elderly (PACE), Roger, 63, was is despair. Emotionally, he felt isolated. Physically, he was in pain. Spiritually, he felt like giving up.

“I was living in a dive hotel downtown that was full of roaches and bed bugs,” Roger recalls. “There were gangs on the block. They sold drugs in front of the building. They harassed the people who lived there. It was a small room, about 10’ by 10’; it was dirty. It cost me $500 a month.

I hadn’t had my revision operation on my leg that was amputated and it never healed right. It would ooze out on the floor and I had to mop it up.”

Despite the harassment he often received, Roger would sit in front of the building just to get out of the room. With no family in San Diego, CA, he had no one. Sitting in front of his hotel room provided momentary peace, but still he felt hopeless.

At a clinic down the street, Roger heard about St. Paul’s PACE. It became a lifeline for him.

“I needed help,” Roger explained. “I had a lot of health problems. I lost my leg to a bone infection and I have bad circulation in my right leg. I have mental health problems and suffer from PTSD. St. Paul’s PACE helps me.”

“I have gotten to know St. Paul’s PACE staff. Everyone knows me. They are like family.” 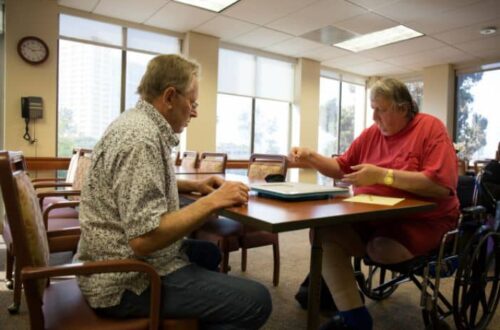 St. Paul’s PACE has helped to improve Roger’s life in many ways. His health is better. He underwent revision surgery on his amputated leg and it healed properly. He receives the medication he needs. His mental health has improved. He looks forward to coming to St. Paul’s PACE for the socialization. He particularly enjoys the music therapy which has even inspired him to begin songwriting. In short, St. Paul’s PACE helped to not only save his life, but improve the quality of it as well.

“St. Paul’s PACE got me into the place where I live now,” Roger beams. “They paid the security deposit. There are a few things I can’t do alone anymore. St. Paul’s PACE helps me. They provide me with good health care and home care. I get psychiatric care, and friendship.”

Roger says his spirit has been good since he became a St. Paul’s PACE participant. He feels less isolated.

If you, or someone you know, would benefit from St. Paul’s PACE, please contact us.

This website uses cookies to improve your experience while you navigate through the website. Out of these, the cookies that are categorized as necessary are stored on your browser as they are essential for the working of basic functionalities of the website. We also use third-party cookies that help us analyze and understand how you use this website. These cookies will be stored in your browser only with your consent. You also have the option to opt-out of these cookies. But opting out of some of these cookies may affect your browsing experience.
Necessary Always Enabled

Any cookies that may not be particularly necessary for the website to function and is used specifically to collect user personal data via analytics, ads, other embedded contents are termed as non-necessary cookies. It is mandatory to procure user consent prior to running these cookies on your website.